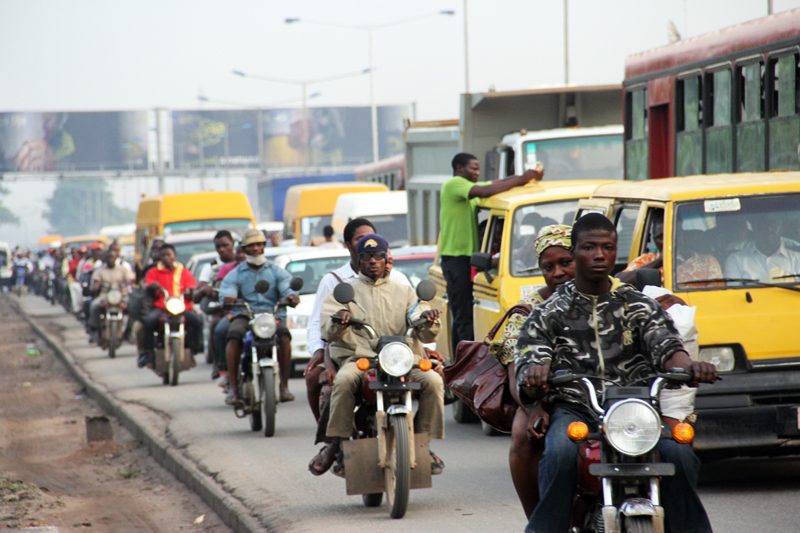 Ever since Gov. Fashola pulled the rug from under our feet with this whole Okada restriction, it has become increasingly hard as a lady without a car to maintain my Number One Rule: No giving out phone numbers. You see, I previously would never accept lifts from anyone. We all know the fear of “One Chance” is the beginning of wisdom.  I don’t want to end up as a Spiritual ATM in anyone’s wardrobe with a calabash on my head, spitting crisp One thousand Naira notes for the rest of my existence. Plus, I really do hate having to sit in traffic and pretend to have a lame conversation which usually ends in “What’s your Number?”  It’s like demanding the payment. Can’t some men just do a good deed?

But look what Boda Raji has caused. I can no longer fire bike from CMS to Eko Hotel when I am running late for work and buses have become essential commodity. And I’m not even talking about BRT, you know those Volkswagen “faragon” buses that fly from Adetokunbo Ademola Roundabout to Mushin in 1 hour? Yeah, those ones. If you are unfortunate enough, the windows at the back will be sealed so that you can enjoy the medley of Body Odour oozing from people, and this has nothing to do with the time of the day at all. Some people are “obuko”, those goats that you can smell from a mile away. They wake up smelling and go to bed smelling. Perhaps it’s that they cannot have a bath, or soap and water have become too expensive, I cannot quite tell.  When I become a Billionaire, I will give all the “Up- National” Chairmen Okin soap to share for all their boys and drill borehole in every park. But that’s a story for another day.

The past couple of weeks have been eye-opening. I have even contemplated going back to my village, because Lagos is a Jungle where only the Fit or Rich survive and I don’t fall in either category. I know that’s hard to believe, at least the Fit part. Even I wouldn’t accept that at first, but rewind to two Tuesdays ago. I’m at Adetokunbo Ademola Roundabout at 5:20PM trying to get a straight bus to Ojuelegba, or even Costain. Shebi at all na him bad pass. But what I’m seeing here is beyond me. There’s a crowd of over hundred people and BRT queue is totally out of the question-  Those ones are time-wasters of life. I tell myself it cannot be so bad. When push comes to shove, I’ll take a taxi. Boy, am I wrong! The First bus comes, over-priced, understandably, but before the Conductor opens the door the bus is full! *ghen-ghen*. I’m not exaggerating. It appears there are people way more ingenious than I am; they simply opened the boot and climbed in. when I look in the bus, i get the shocker of my life……….. they are all young wo-men! I console myself, after all, a real lady will never conduct herself in such manner (storyland). The next two buses arrive, same “from the boot” story, except that the boys are “manning-up”. After 30 minutes, i know it’s time to hail a cab, but there are no cabs. The only one I got, one old man with tribal marks on his face, is also over-priced, Three Thousand Naira to Surulere . That is simply illogical and against everything the United Nations stands for. After he says three thousand, I no longer listen to what he’s saying. I focus on trying to count the strokes on each side of his face. Incidentally, there are three on each side, maybe that’s thelogic behind it (Ibadan man wey wan hammer for Lagos).

After one hour, I am back in my office to re-strategize. After strategizing for an hour, I’m back at the spot. Add another one hour to this, still no taxi, no bus, and sadly, no more bike. It is time to break my own rule. I will accept a lift if I am offered,  but this is new turf to be treaded with caution. Thankfully, there is traffic so I can at least try to analyze the cars and drivers before I enter.  The first one that offers me a lift is driving a dead Golf 2. He has the face of an “eru-iku” and the mannerisms of a smuggler.  You know those people that you would arrest if you were a policeman, even if you saw them having a conversation and walking hand-in-hand with Jesus? He looked like one of them, so I let him pass.  The next one is driving a Hilux and acting all so fresh, so clean. But I can tell he’s the driver of the vehicle, not the owner (like say no be just ride I dey find o). These drivers, I have heard different stories of kidnapping their Ogas’ Children for money and I refuse to be a headline (Island worker takes last ride in fancy Hilux., PM News), plus he looks like he will ask for my number. Finally, there’s someone that looks like the regular Chap: Mid-thirties, closing from work, another colleague in the car and It’s an End of Discussion. He hesitates at first, and then he stops. “Are you going to the Mainland?” I nod in the affirmative. “Come in”. Mr. Nice moves his jacket and Bible to the other side of the Seat so I can sit conveniently. He says he’s going to Surulere and  asks for my name and where I work. Then he drops me off at Stadium. It is 9:30PM. He does not ask for my number.

It’s Saturday evening. The week has been unimaginably long. I need a treat, after all, YOLO. I stroll to my junction and jump on the next available bike to my usual Shawarma place. Thankfully, we won’t be passing any major road. There should be no Police Issues. Before I am done with my line of thought, we are at a “checking-point”. This okada man is refusing to pay, he just passed there some minutes ago and he paid then (like that matters with the men of the LAPD…lol). Me I don’t want any trouble, he should just pay jeje before the Shawarma will finish. Finally, the gun-totting Policeman asks “wetin be your number?” He says “7”. The Policeman confirms from the Plate Number on the bike. It’s the first digit. He passes us.