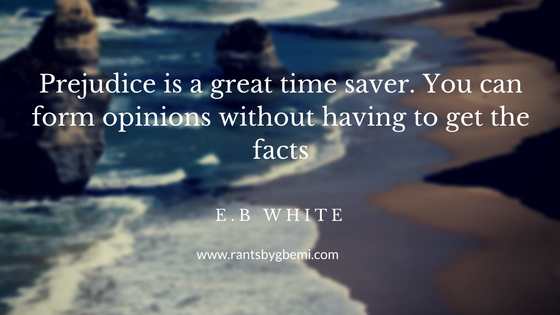 Disclaimer: By typing this, I am not making generalizations about any race or ethnicity. I am simply sharing my story as it happened to me. If you do not agree with my story, welp…

I live in Nigeria, the most populous black nation in the world so it’s a no-brainer that almost everyone in Lagos, my country’s commercial capital, is Black. And while Lagos has a thriving expatriate community, I would believe that their population pales in comparison to the population of Nigerians.
I live in a block of flats in Ikeja. It’s not spick and span but it’s fair enough. It’s close to work, actually a walking distance, so I get to dodge the crazy Lagos traffic. It’s also very quiet and is the perfect hide-out for a hermit like me. My neighbors are from Nigeria, India, Philippines and Vietnam, so it’s quite the mix. I rarely have people come over, enough to make anyone uncomfortable but even when I have guests, I make sure we’re not invading anyone’s privacy.

Last weekend, my friend, who stays with me on and off, was trying to shoot a short home-made film. It’s really a project on the scale of say, a make-up tutorial. Only difference was the fact that we wanted something with a professional touch, so we got a videographer, while my friend’s brother and another friend of mine were assistants. In all, I had about eight people over, most of whom were inside my apartment. We had a scene to shoot outside, which involved a male friend driving my car, into the premises and parking right outside my apartment. I made sure we didn’t go beyond my apartment as I didn’t want to invade anyone’s privacy.

About an hour into the shoot, I get a call from the estate management to ask why I have people over. The facilities’ manager goes on and on about how my expat neighbors are uncomfortable because I have guests. I explain that all we’ve done outside is drive my car into the gate and park it at my allotted spot but he’s too unrealistic to listen. Finally I tell him, in my loudest voice which my expat neighbor on the third floor can hear that all I have done is drive the car that I bought into the compound where I pay rent and service charge and park in my allotted spot. I also tell him that I believe that I am loud enough so anybody who has a problem with my friends coming and going out of my house should come downstairs and meet me. Sadly, no one came downstairs.

I had heard stories in the past about expats trying to make sure no locals live in the same apartment complex as I did. I always thought they were really far-fetched. However, paying attention to race relations and last Saturday’s events really made me understand something. There is a FEAR of black people that I cannot understand. If you live in Nigeria, a country of black people, why should you be scared if you see black people? You shouldn’t be here at all if you are afraid. It is probably one of those things I will never understand, but I also will never condone it. I am my mother’s daughter.

I did get an apology from my estate management on Monday evening, and a plea for this not to be on the internet. But I own my experiences and what I choose to do with my what has happened to me is totally up to me. To paraphrase Anne Lamott, if people want you to write kindly about them, they should treat you better.

How’s everyone else doing?