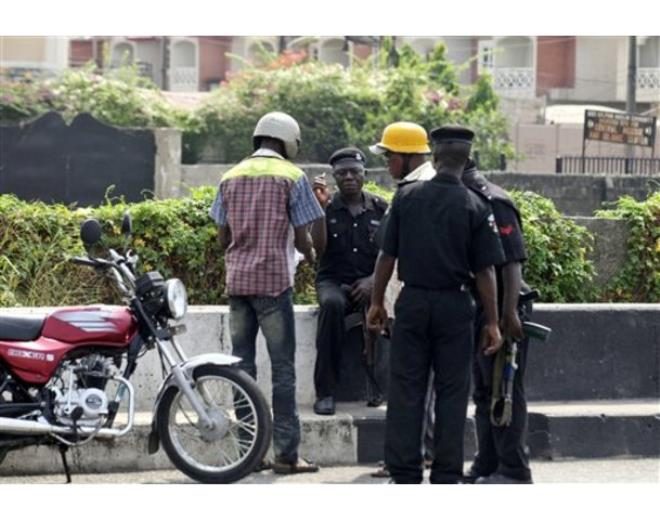 Any time I see a Policeman, I hold my breath for two reasons: First, because the Nigeria Police Force uniform is black and very likely to be unwashed for a long period and i get nauseated easily and secondly because they are prone to accidents- bashing your car, destroying your side-mirror and threatening you and greatest of all, accidental discharges from their guns.

I always thought that the Police was really not as bad as people think they were, you know how Nigerians like to think the worst of ourselves and our Institutions, now I know better.  I will not be caught making vague generalizations, at least Policemen arrested Cynthia Osokogu’s killers, and I admit not all of them are trigger-happy and thieves, but their ineptitude is alarming. I am of the opinion that if you need a Policeman to tie his shoelaces, you have to “financially induce” him.

Sometime in November, i had the misfortune of having to report a burglary at the police station. A Laptop, Clothes, Jewellery and credentials had vanished, well, not exactly. My cousin and I had “gucked” our keys somehow, and someone or some people had strolled in and helped themselves. I remember leaving everything at work at 8:40pm and rushing home to meet a totally ransacked room with most of our valuables gone. It was time to use the many episodes of CSI and Law and Order i had watched. After screaming my lungs out, just so my neighbours would know that I was capable of being troublesome too, I called my Uncle to take us to the police station.  Knowing the stereotypes about young single women living alone, it was important we went there with a male chaperon.

The Police Station I saw was actually slightly better than the ones I had seen on Africa Magic- There was a couch. We were met by a team of three at the counter- two men and a very smart looking woman.  After explaining our ordeal to the woman, she was going to hand us over to one of the men when an old man charged in. He had come to report that his eldest daughter, who I could presume from his description was in her 20s had been bitten on her left breast by a neighbour. I don’t remember if it was his theatrics or the story itself that moved me, but I remembered having to stifle laughter. He was of course tossed around by the police who at first said there was no car or willing Officer to follow him. The woman on duty who was willing to follow him was not permitted to, because she was a woman. Eventually, he was led out to meet some other officers on duty and we had their attention again. One of the two male officers on duty, an elderly spelling-challenged man from the North or Middle Belt was to make a report for the Crime Diary. After blaming us for being careless, he proceeded to take our statement on the Margins of an old newspaper. We were then “transferred” to the Crime Desk- something slightly better than a carpenter’s shed and which also doubled as a changing room and a lounge. We were handed paper and pen to write our statements with express instructions not to paragraph the statement. Our IPO told us to come back the next morning so we could show him our house and the pictures we had taken.  Our IPO… *sigh*

Our IPO was about an inch taller me (meaning he was short), chubby and relatively neat. He had a slight limp and he wore the kind of shoes Solo in the “Lagos Nawa” film wore. I still cannot be sure of where he was from because even though he understood Yoruba well, he spoke like a kobokobo. The night we made our report, my Uncle “thanked” him with a “handshake”. I did not know that that fuel was only sufficient to get IPO from the police station to the crime scene the next morning. After IPO had taken his notes, he left us with these wise words: “The person wey do this thing, he go just dey waka for road, motor go jam am. When God go judge am, e go be like as e dey be for film. E fit just craze  for road. Make una try do affidavid(sic) so una go fit get another copy of your certificate” .

We were lost for words for the next couple of minutes. He had been told who and who were in the premises at the time. We thought that he was going to ask questions, and that was it?  “Motor go jam am”? Not wanting to give up, my cousin went to the Police Station again with another Uncle who also “shook” IPOs hands. The handshake worked as IPO called me on Monday morning to lead him to the house of the suspect’s employer. She was told to report at the Police Station the next day with the Suspect. Sadly, when they both showed up the next day, IPO was not there and he would not answer his phone. Afterwards, Suspect disappeared till date. That was the last time we saw or heard from IPO again. Till date, none of our personal effects have been retrieved, and the case is as good as closed.

I don’t know what has left me more traumatized- the loss of our belongings or my experience with the Police. But if they are as clueless as this on simple investigations, I imagine why they misbehave when they are with guns. I also know certainly that the next time someone prays “a o ni r’ogun police station” my “Amen” will be the loudest. And finally, besides God, whether you have money or not, you really are on your own.

On a brighter note, Gbemi is thankful that no life was lost in the episode. Awon Boda mi alaso dudu would never have known whodunit.

Here’s hoping 2013 will be a better year all round. I have gotten used to living in this era of the new traffic laws but I wouldn’t mind a car. And of course I’ll be more careful with my belongings. I hope you are too.